Ukraine’s President Volodymyr Zelensky has paid a defiant wartime visit to Washington to thank Americans for helping to fund the war against Russia.

In a speech to Congress, he said the money is “not charity” but an “investment” in global security and democracy.

The whirlwind stop in Washington — his first known trip outside his country since Russia invaded in February — was aimed at reinvigorating support for his country in the US and around the world at a time when there is concern that allies are growing weary of the costly war and its disruption to global food and energy supplies.

Mr Zelensky called the tens of billions of dollars in US military and economic assistance provided over the past year vital to Ukraine’s efforts to beat back Russia and appealed for even more in the future.

“Your money is not charity,” says President @ZelenskyyUa to Congress about financial assistance to Ukraine.

“It’s an investment in the global security and democracy that we handle in the most responsible way,” he adds.

“Your money is not charity,” he sought to reassure both those in the room and those watching at home. “It’s an investment in the global security and democracy that we handle in the most responsible way.”

Just before his arrival, the US announced a new 1.8 billion dollar (£1.5 billion) military aid package, including for the first time Patriot surface-to-air missiles. And Congress planned to vote this week on a fresh spending package that includes about 45 billion in additional emergency assistance to Ukraine.

The speech to Congress came after President Joe Biden hosted Mr Zelensky in the Oval Office for strategy consultations, saying the US and Ukraine would maintain their “united defence” as Russia wages a “brutal assault on Ukraine’s right to exist as a nation”.

Mr Biden pledged to help bring about a “just peace”.

Mr Zelensky told Mr Biden that he had wanted to visit sooner and his visit now demonstrates that the “situation is under control, because of your support”.

The highly sensitive trip came after 10 months of a brutal war that has seen tens of thousands of casualties on both sides and devastation for Ukrainian civilians.

Mr Zelensky travelled to Washington aboard a US Air Force jet.

The visit had been long sought by both sides, but the right conditions only came together in the last 10 days, US officials said, after high-level discussions about the security both of Mr Zelensky and of his people while he was outside of Ukraine.

Mr Zelensky spent less than 10 hours in Washington before beginning the journey back to Ukraine.

In his remarks to Congress, Mr Zelensky harked back to US victories in the Battle of the Bulge, a turning point against Nazi Germany in the Second World War, and the Revolutionary War Battle of Saratoga, an American victory that helped draw France’s aid for US independence. 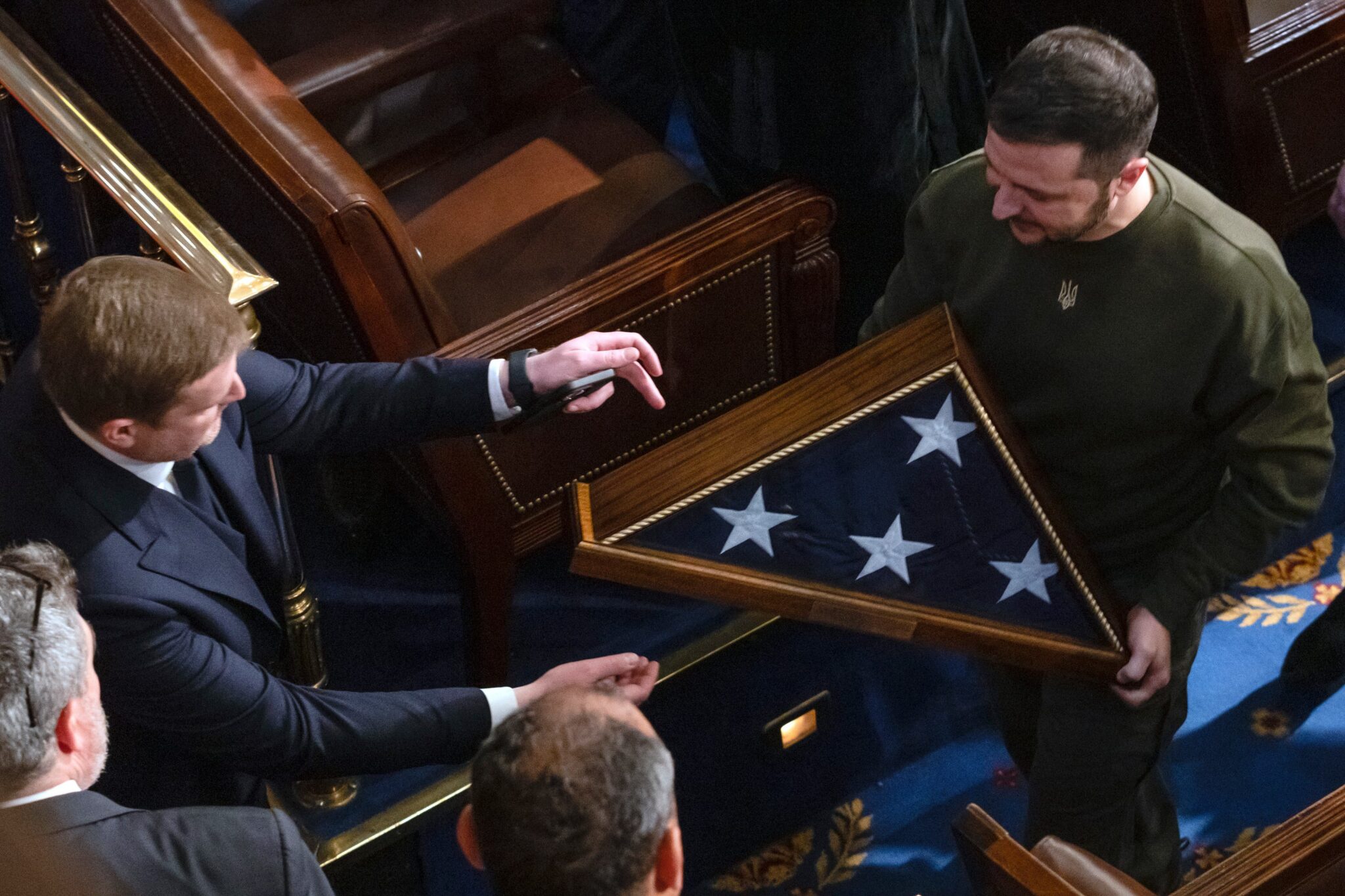 The Ukrainian leader predicted that next year would be a “turning point” in the conflict, “when Ukrainian courage and American resolve must guarantee the future of our common freedom — the freedom of people who stand for their values”.

The flag was displayed behind him on the rostrum by House Speaker Nancy Pelosi and Vice President Kamala Harris. Ms Pelosi, in turn, presented Mr Zelensky with an American flag that had flown over the Capitol that day, and Mr Zelensky pumped it up and down as he exited the chamber.

Declaring in his speech that Ukraine “will never surrender”, Mr Zelensky warned that the stakes of the conflict were greater than just the fate of his nation — that democracy worldwide is being tested.

“This battle cannot be ignored, hoping that the ocean or something else will provide protection,” he said, speaking in English for what he had billed as a “speech to Americans”.

Earlier, in a joint news conference with Mr Biden, Mr Zelensky was pressed on how Ukraine would try to bring an end to the conflict.

He rejected Mr Biden’s framing of finding a “just peace”, saying: “For me as a president, ‘just peace’ is no compromises.”

He said the war would end once Ukraine’s sovereignty, freedom and territorial integrity were restored, and Russia had paid back Ukraine for all the damage inflicted by its forces.

“There can’t be any ‘just peace’ in the war that was imposed on us,” he added. 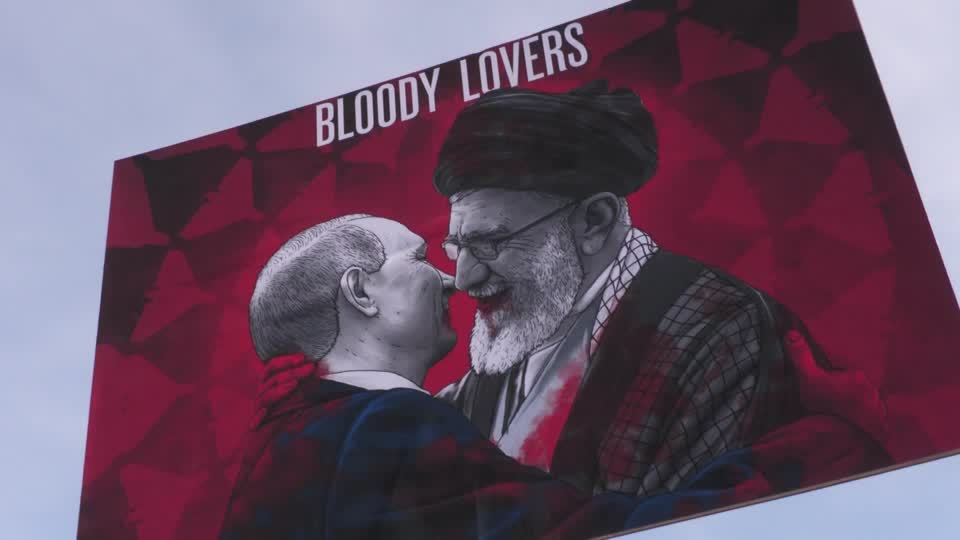 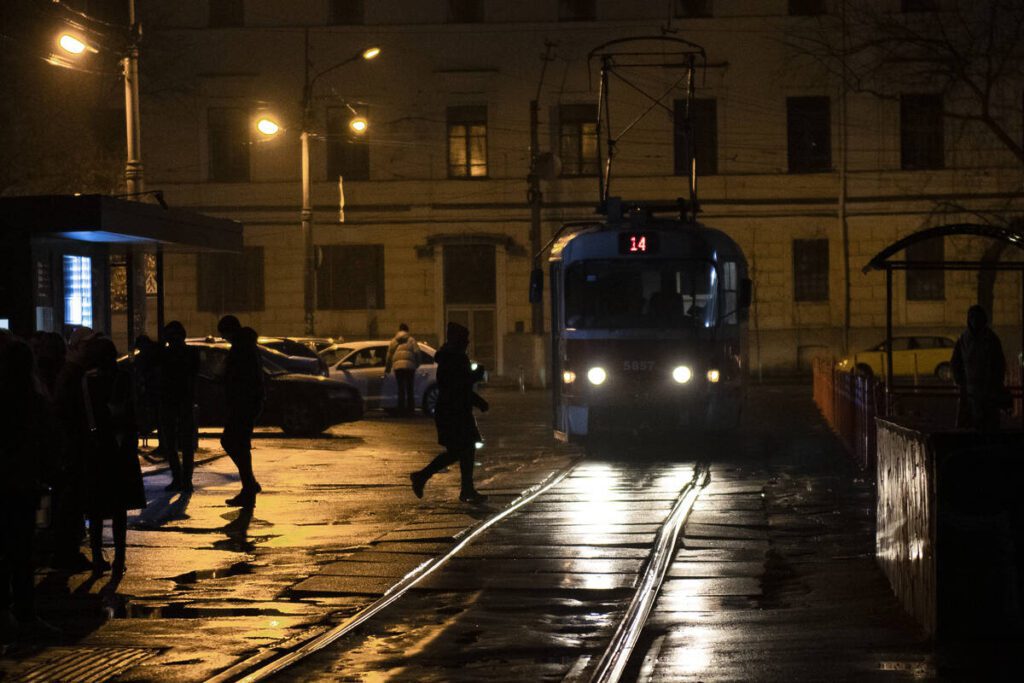