2022 was supposed to be a new beginning – a rebirth – or so we all thought. Howbeit, it has so far painted out a gloomy picture.

We thought we were done with the last two years of pure madness owing to the global pandemic. If you recall, all of the late 2021 prognostics were optimistic.

As a matter of fact, the global economy shrunk by 4.4% in 2020, according to the IMF. A decline worse than that of the great depression. Subsequently, almost all countries entered a sustained recession.

As early as December last year, troops on both sides of the Russia-Ukraine border began to amass.

Ukraine stationed its soldiers on the western edges of the Luhansk and Donetsk Ukrainian regions and just about 3 months back, on the 24th of February, Russia declared the start of its “special military operation” and effectively invaded the Ukrainian territory. The second-order effects of the ensuing armed conflict rippled across the globe and continue to do so.

It’s now well known that Russia and Ukraine account for a large share of the global commodities market. These two neighbors produce and export everything from

Each and every one of these items is a critical input for much of the industrial base.

Wheat is used by bakeries, breweries, and as feedstock. Neon gas is used in chip manufacturing. Potash in the production of fertilizers.

and petroleum as energy sources and steel and other metals in construction and manufacturing. The list goes on.

With raw materials prices going off the roof, producers naturally transfer some of their costs to consumers. But usually, these distortions are temporary. Except that this time around, things might go south before they eventually get better.

In retaliation for Russia’s invasion, the collective West issued an “unprecedented sanctions package” aimed at hurting the Russian economy. The sanctions targeted specific individuals, companies, and Russian entities. Additionally, many western countries either halted or severely reduced their trade with the Russian Federation and encouraged other countries to do so. India on its part decided to honor its historic ties with Russia.

Sanctions have traditionally been used as a punitive action for countries that the West deems “rebellious”. Without going too deep into the geo-politics rabbit hole, let’s just say that the chief goal of sanctions is to topple adversarial governments and bring them “in line” with global interests. That objective is realized by inflicting pain on the local economy and regular citizens.

Sanctions may not necessarily have a good track record of achieving their goal. And one might even say that this particular set of hysterical sanctions backfired. 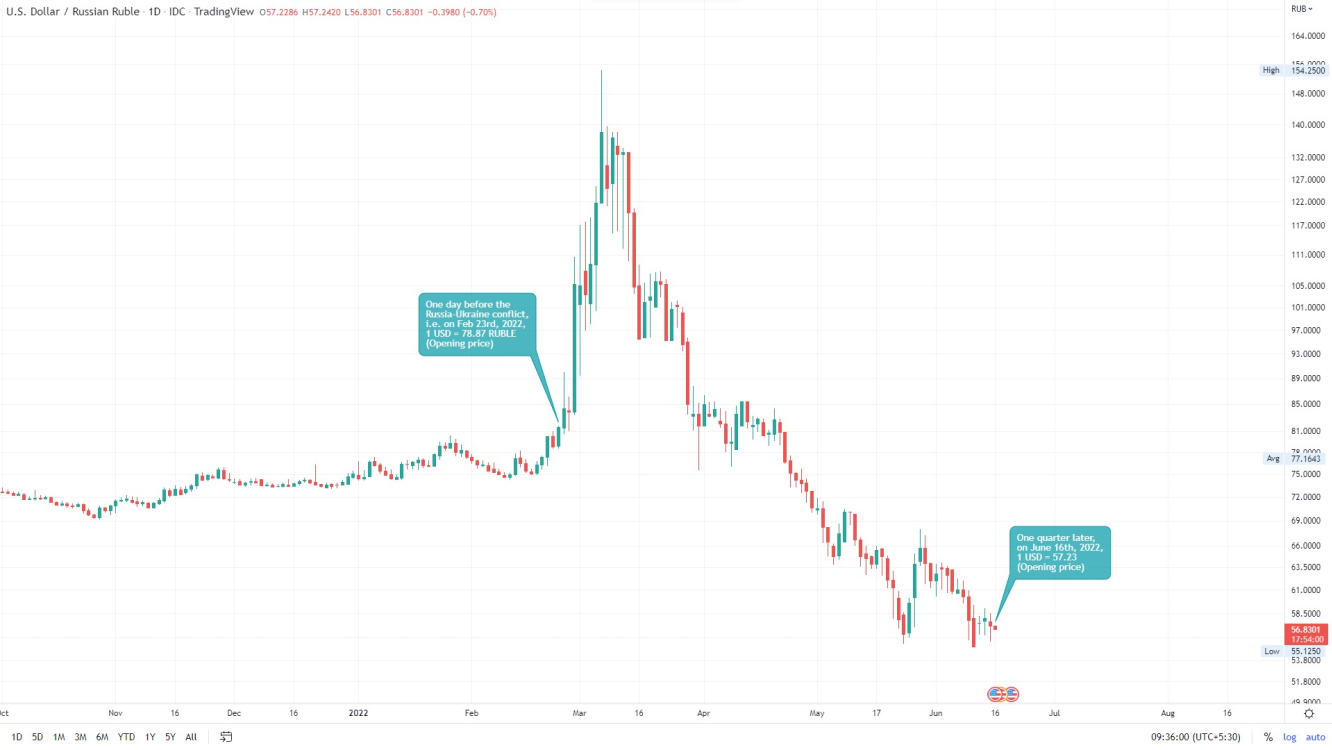 As we can see from the above chart, Russia’s currency, the

How much of that is Russia’s central bank propping up the Ruble and how much of that is organic, is anyone’s guess. Though some currency speculators must have made a quick buck from this short-term distortion and the currency is far from its predicted collapse. 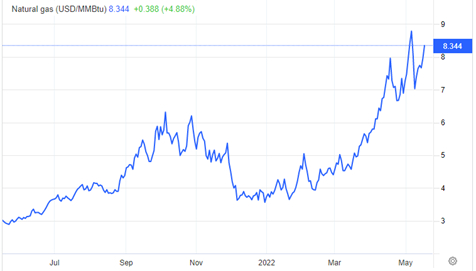 As the chart above clearly shows,

and natural gas prices have been sharply increasing since the beginning of the conflict. Furthermore, a plethora of decisions made over the ensuing months has only exacerbated the situation. That includes the decision of European nations to ween off Russian gas and the decision made by the Kremlin to trade gas for the Rubles.

That being said, despite Europe’s and the global West’s decision to halt trade with Russia, some of the Russian resources will still find their way to these markets in clever roundabout ways. As we speak, traders in some of the Asian nations may be making fortunes by charging hefty markups to facilitate these transactions.
As for the question as to whether there will be a regression to the mean?

Hard to tell. But it is quite likely the situation may exacerbate as Russia recently decided to cut some European nations off their gas and other resources.

Additionally, the situation between Ukraine and Russia has not been resolved. The prices of other commodities such as wheat will continue to spiral upwards. Ukraine, being a major wheat exporter, has missed the planting season. This year’s harvest will be unusually low.

As a matter of fact, it is likely that we may run into global food shortages and obscene price hikes this winter for critical resources such as food and energy. Instability is already being felt in some places like Sri Lanka and Peru.

The above chart tracks the price of energy consumed by EU households. The peak consumption months are in the winter (for obvious reasons). Energy prices have been steadily dropping over the years thanks to new technologies. Except for this year. The situation is also likely to get worse as mentioned previously. The EU by itself is a huge global market. If EU households are allocating a significantly larger portion of their incomes towards purchasing necessities such as food and energy, that would result in a sharp drop in consumer spending and is likely to affect EU imports dragging down the world economy with it.

As for India, well the situation will, fortunately, be mitigated. A big part of Russia’s energy products that were destined for the EU and the USA are being diverted to India and other nations.

Prices may increase, though the word on the ground is that traders are able to purchase Russian resources at discounted prices from what is currently offered on the market. India will suffer less than the West, for sure. And it might actually profit from the West’s current “financial fiasco”.

What about the world’s largest economy? The situation does not appear to be particularly joyous.

A few weeks ago, the yield curve reversed (meaning that short-term interest rates exceeded long-term ones, namely for treasury bonds). This event has often been touted as a clear sign of a coming recession.

Currently though, as you can see in the table below (courtesy of www.tradingeconomics.com), the US GDP dropped by 1.4%. Adding to that a particularly high inflation rate (the real inflation rate is likely to be much higher than the one put forward), rising consumer prices, and rising energy costs.

You now have a definite recipe for a recession.

If we continue to look at the table above, we will notice that almost all the major world economies, India included, are suffering from above-average inflation rates.

As for the S&P 500, well you can see for yourself. It’s been in a freefall for the past two months and broke below 52-week lows in the second half of May ‘22. And judging from the current state of the economy, things are likely to get worse. As a matter of fact, many have been warning of the collapse of the stock market. A market that has been so far inorganically propped up, thanks to the Fed’s continuous money printing over the last years.

The damage being done to the American economy, coupled with a loss of faith in the US dollar (due to the USA confiscating approximately $300 billion of Russia’s foreign reserves and flamboyant Federal Reserve quantitative easing policies over the years) are likely to affect the global economy in yet unforeseen ways.

Far from engaging in war profiteering, we must admit that life every so often throws our way, obvious “buy” opportunities. In these cases, assets are severely discounted and are waiting for investors with an available dry powder to scoop them up.

The issue though has always been timing. Jumping on these opportunities requires nerves of steel and a long-term outlook. It can take anywhere from weeks to years for the situation to reverse. As such, one can dollar cost average into these opportunities, place asymmetric bets, use hedging strategies or combine multiple risk dispersion tactics.

The critical factors though, essential in turbulent times, have always been a cool head, the ability to discern truth from lies, and rock-solid analysis.

“The first panacea for a mismanaged nation is inflation of the currency; the second is war. Both bring a temporary prosperity; both bring permanent ruin. But both are the refuge of political and economic opportunists.”
– Ernest Hemingway