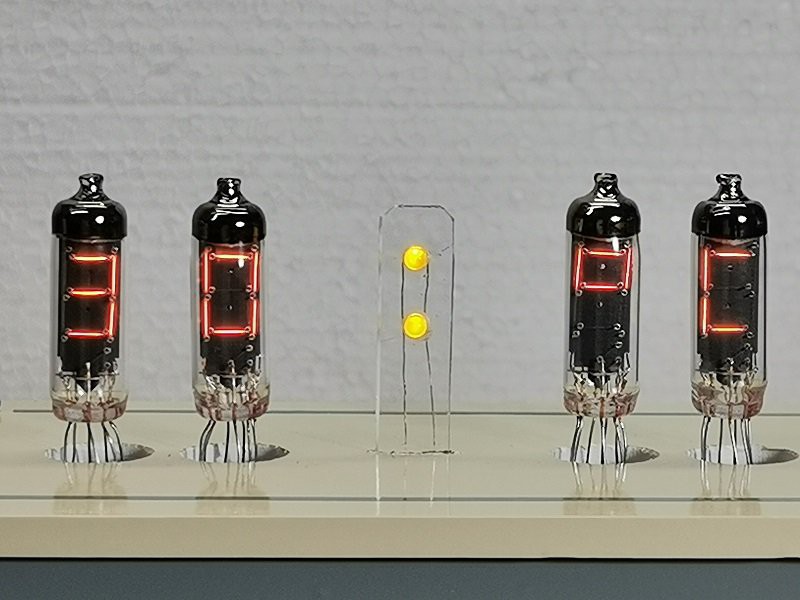 While it seems like Nixie tubes get all the attention when it comes to making retro-style displays, there are plenty of other display technologies that can make a good-looking retro design. Take the Numitron tube: introduced by RCA in the early 1970s, these display tubes might look superficially similar to Nixies but work in a completely different way. The Numitron uses incandescent elements that make up seven-segment displays.

The main advantage Numitrons have over Nixes is that they don’t require a high-voltage supply, which makes them much easier to hook up to modern low-voltage electronics. [mircemk] used this to his advantage when he built a simple clock using four numitrons that can display the time, the date, and the ambient temperature.

The brains of the device are formed by an Arduino Nano coupled with a DS3231 battery-backed real-time clock module. For now, the time has to be synchronized by connecting the Arduino to a PC and reprogramming it, but [mircemk] has plans to update the design with pushbuttons to allow the user to set the time manually.

Four shift registers are all that’s needed to interface the microcontroller to the display tubes, thanks to their low-voltage operation. They do need quite a lot of current, so [mircemk] used the high-power TPIC6C595 instead of a  regular 74HC595 chip. We wonder if the tubes’ high power consumption could be the reason why the temperature in his lab seems to hover around 30 °C.

A simple but stylish plastic enclosure completes the design. Since Numitron tubes are relatively low-cost and no other specialized components are needed, this could be one of the cheapest and easiest ways to make a retro display tube clock. Although we’ve seen a couple of Numitron clocks and even watches before, today’s build is a great example of how simple such a design can actually be.