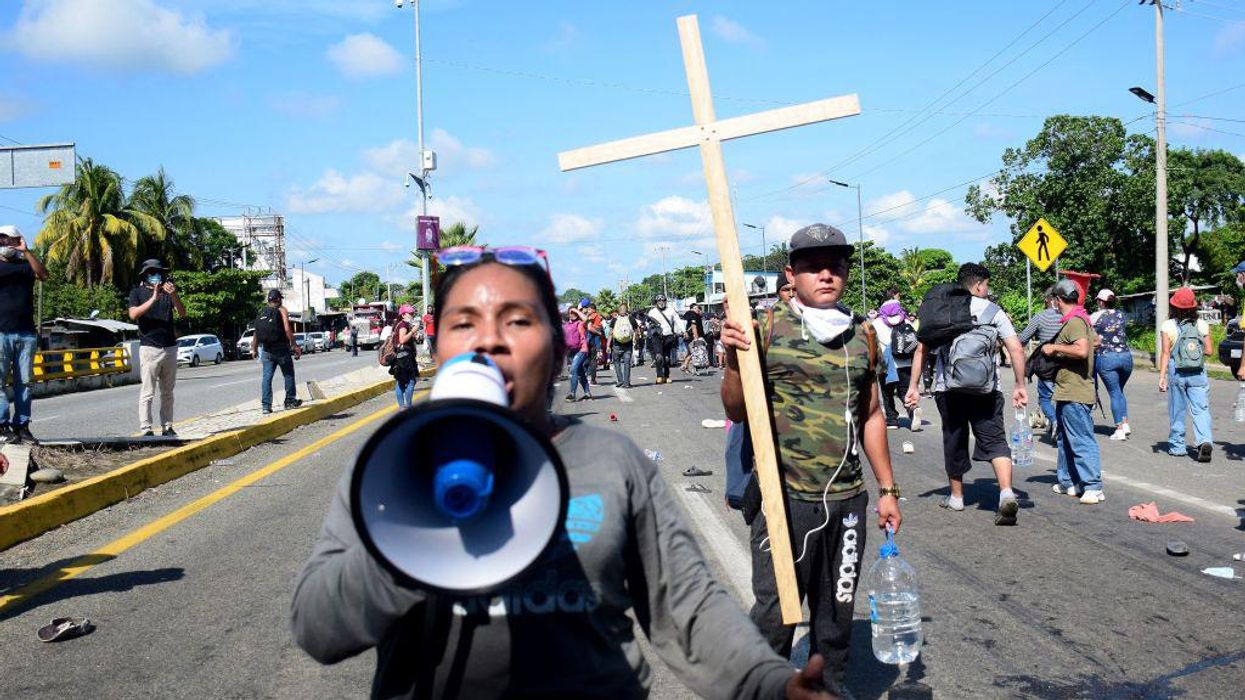 A 3,000-person migrant caravan that made headlines over the weekend for blasting through a roadblock set up by the Mexican National Guard was organized via QR code, according to Fox News.

The caravan, which is made up of people from Central America, South America, and Haiti, is being tracked by Fox News National Correspondent Griff Jenkins, who has followed the migrants along their trek northward since they left the southern Mexican city of Tapachula three days ago.

Jenkins reports that this caravan is the largest and most organized caravan that has traveled north from southern Mexico this year. Thousands of people signed up to travel to the United States via QR code starting Oct. 15.

Video footage captured by Fox News shows men and women of all ages, including some small children being pushed in strollers, walking north about 20 miles from Tapachula. One person can be seen carrying a large wooden cross at the front of the caravan and others are carrying American flags and signs with President Joe Biden’s name.

DAY 3… 20 miles North of Tapachula. This is the largest most organized Caravan we have seen come out S Mexico this… https://t.co/xbLEFwzDNb

This is the QR code that migrants in the Caravan used to sign up… @FoxNews #BorderCrisis https://t.co/sJpwIa0vVK

“President Biden, we need your help,” another migrant said.

These migrants have another 2,500 miles to walk before they reach the Texas border. Fox News reports that the caravan will need to travel by foot because the Mexican government has banned truckers from letting migrants hitch a ride northward.

The caravan is making its journey to the U.S. just as the Biden administration is following a court order to reinstate former President Donald Trump’s “Remain in Mexico” policy, which will require asylum-seekers to wait in Mexico while they are being processed for entry into the U.S.

Border Patrol officials told Fox News last week that as many as 60,000 migrants are gathering on the Mexican side of the border to attempt to cross into the U.S. before the Biden administration reimplements the Trump-era policy.

Meanwhile, the Biden administration is searching for a legal way to repeal the “Remain in Mexico” policy even as it is following a court order to put the policy back into effect.

On Friday, Customs and Border Protection reported there have been more than 1.7 million encounters with illegal immigrants in FY 2021, a record high number. Republican critics have blamed Biden’s attempts to repeal Trump’s strict immigration policies for incentivizing illegal immigration and contributing to a humanitarian crisis on the southern border.

The Biden administration said root causes like poverty, corruption, and violence in South and Central America are pushing migrants north to seek refuge and jobs in America.

In a statement Sunday, Trump said the U.S. is being “poisoned” by the overwhelming flood of illegal immigration and the Biden administration’s refusal to secure the border.

“Our Country is being poisoned with the millions of people that are illegally flowing through our Borders, in most cases not even questioned or stopped. Many are criminals from the emptied prisons of other countries, most of these are very dangerous people,” Trump said in a statement emailed to reporters.

“Our country is dying from within and nobody is doing anything to stop it. The first thing that should be done, and it can be done quickly, is FINISH THE WALL. A deal must be made with Mexico, where Mexico serves as a 2,000-mile barrier, not a launching pad for the illegals that are coming in,” the 45th president said.