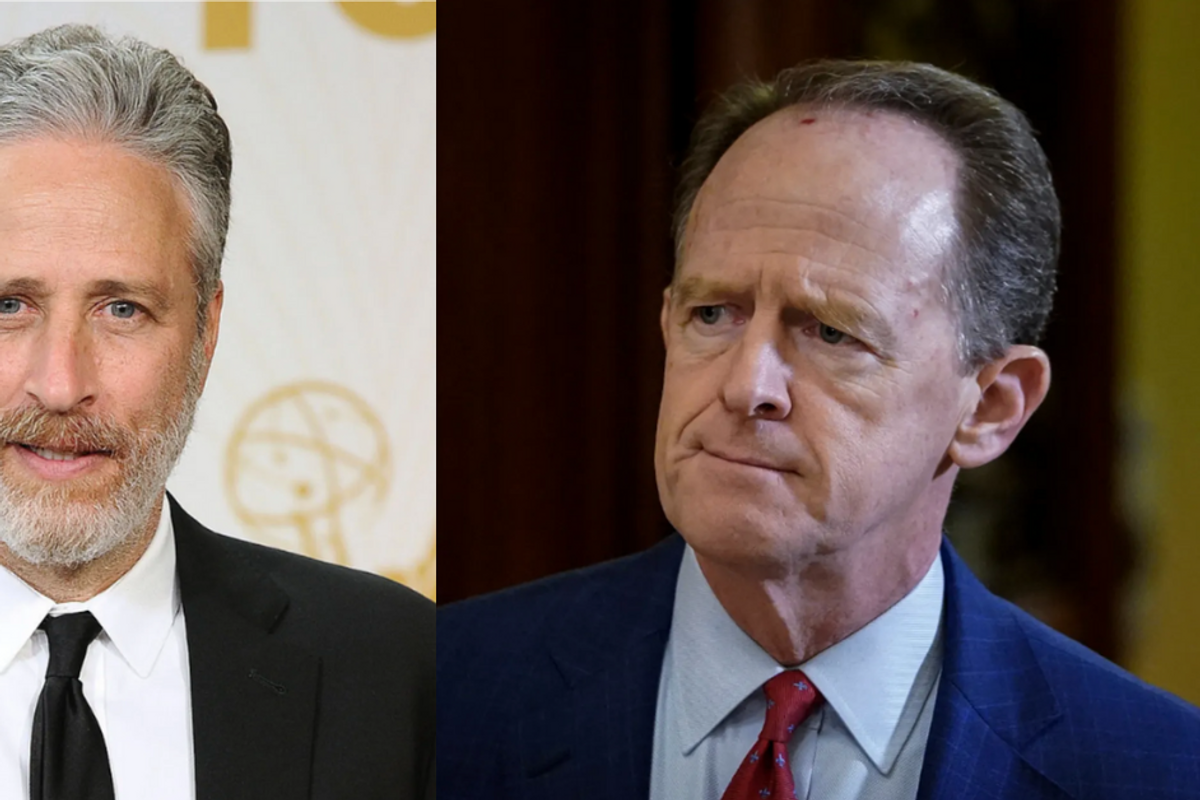 After Pennsylvania Republican Senator Pat Toomey referred to him as a “pseudo-celebrity,” comedian Jon Stewart hit back by pointing to Toomey’s recent vote against vital benefits for United States military veterans.

Toomey had earlier appeared on CNN to respond to criticisms about his vote to block a procedural vote that would clear a path for a vote on legislation to expand benefits for veterans who were exposed to toxins like burn pits in combat zones in Afghanistan and Iraq.

Toomey accused Democrats of crafting a bill to address issues involving groups dealing with illnesses or crimes, saying they then sneak in something completely unrelated they know could never pass on its own, and “dare Republicans to do anything about it.”

He added Democrats do this knowing with “a pseudo-celebrity to make up false accusations to try to get us to just swallow what shouldn’t be there.”

You can hear what Toomey said in the video below.

“This is the oldest trick in Washington.”

“People take a sympathetic group of Americans — and it could be children with an illness, it could be victims of crime, it could be veterans who’ve been exposed to toxic chemicals — craft a bill to address their problems, and then sneak in something completely unrelated that they know could never pass on its own, and dare Republicans to do anything about it.”

“Because they know, they’ll unleash their allies in the media and maybe a pseudo-celebrity to make up false accusations to try to get us to just swallow what shouldn’t be there.”

Burn pits are a common waste disposal practice at military sites outside the United States but have been the subject of controversy because burning solid wastes in an open pit generates numerous pollutants that cause different types of cancers, respiratory disorders, high blood pressure, autoimmune disorders and even birth defects.

In June, the House and the Senate passed a bill known as the Honoring Our PACT Act with bipartisan support. However, issues with the bill’s language prompted it to pass both legislative chambers again.

This time however, multiple Republican Senators reversed their support—and went so far as to congratulate themselves for denying veterans vital support.

Though Toomey never mentioned Stewart by name, he didn’t have to.

Stewart was one of the more vocal “pseudo-celebrities” to speak out against Republicans who scuttled the legislation last week, at the time calling it “corruption at its finest.”

And when he heard about Toomey’s remarks, he certainly had something to say about it.

Writing on Twitter, Stewart told Toomey that he would “rather be a pseudo celeb than pseudo Senator.”

\u201cMorning @SenToomey I’d rather be a pseudo celeb than pseudo Senator! Take your amendment vote at the same 60 threshold Veterans had to hit…Good luck capping and rationing care!!!!!\u201d

In a follow-up tweet, Stewart said Toomey “never called for spending caps” on the war in Afghanistan, “only on the health care for veterans sickened by said wars.”

\u201cFunny. @SenToomey never called for spending caps on the war\u2026only on the health care for veterans sickened by said wars. Interesting priorities. #PassthePactact\u201d

Many concurred with Stewart’s assessment and offered their own criticisms of Toomey.

\u201cAre @SenToomey & the @GOP endorsing the health care rationing and death panels for veterans @SarahPalinUSA and the @GOP were warning us about years ago? Is this more proof they are all liars and grifters?\u201d

\u201c@SenToomey why? And why are you all fist bumping happy about what you are doing to veterans?\u201d

\u201cThe Toomey schtick is the GQP/RNC/GOP mantra – accuse others of what you do daily- Repubs are Profiles in Perfidy- committing acts of deliberate betrayal of Constitution and 330Mln Americans\u2019 rights.\u201d

\u201c.@SenToomey\n\nI had heard that you support our vets. Guess not if you put petty politics over their healthcare. #VeteransDeserveBetter #PACT\u201d

The PACT Act needed 60 votes to advance. In the end, the vote was 55-42. Senate Majority Leader Chuck Schumer, Democrat of New York, changed his vote from yes to no in order to allow a future vote on the legislation.

There is no word yet on when the Senate, which leaves on a month-long recess next week, will vote on the bill again.

BREAKING: Trump confirms the FBI has raided his residence at Mar-a-Lago