Jason Nadzam stood recently in a cavernous workshop at Community College of Allegheny County’s West Hills complex near the Pittsburgh International Airport. A group of 12 students gathered around him for a morning of training in HVAC – heating, ventilation and air conditioning.

He stood next to a demonstration heat pump, a collection of tubes and wires that looked like an air conditioner linked to a digital screen.

He pointed out basic components – valves, sensors, circuit boards that allow a technician to diagnose a problem in the machine – then turned it on. A motor started to rev, higher and higher, for several minutes.

“Eventually, this thing is going to ramp to full speed, and it’s going to stay at full speed,” Nadzam said. He reached down below a section of pipe. “If you put your hand down here… it’s cold. So it’s picking up heat from the air out here and moving it.” 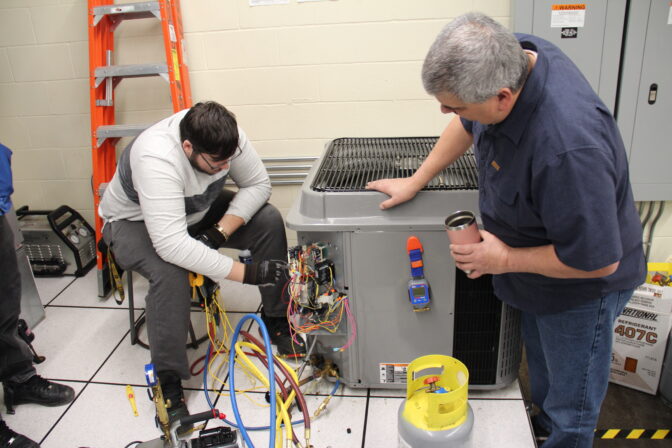 This basic technique – moving heat from one part of the machine to another – is why heat pumps are being discussed as an essential tool to fight climate change. What electric vehicles are to transportation, heat pumps could be to keeping your house warm.

This little-known technology could help reduce one of the largest sources of greenhouse gases in America: home heating. Because they run on electricity, it’s possible to operate heat pumps on zero-carbon sources, like wind, solar and nuclear.

Getting the humble heat pump, which is basically an air conditioner that can run in reverse, into millions more homes, especially in cold parts of the country, won’t be easy. It will take convincing customers and contractors that they’re the right choice. 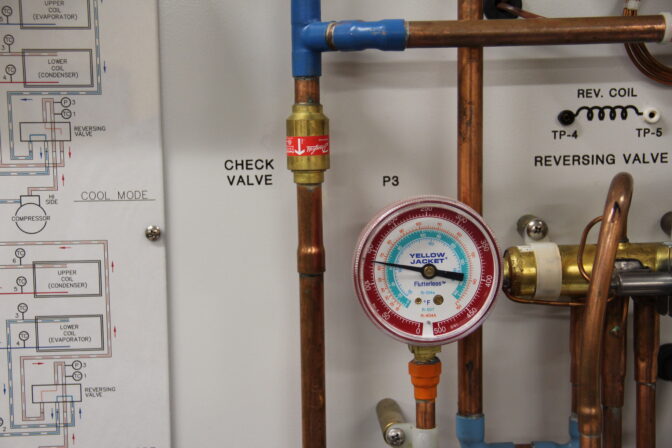 Nadzam says there are economic reasons to install heat pumps in some houses, especially in rural areas.

“You look at the price of what home heating oil is right now. You’re looking at $5 a gallon to fill a thousand-gallon tank to get you through winter. That’s a big pill to swallow,” said Nadzam.

Buildings are second only to transportation as sources for greenhouse gasses, according to Amy Boyd, vice president of Climate & Clean Energy Policy at the Acadia Center in Boston, which helps Northeastern states meet climate targets.

A University of California, Davis study found installing a heat pump could cut carbon dioxide emissions, the main cause of global warming, around 38 to 53 percent from home heating.

“Eliminating the greenhouse gas emissions that are coming from our heat, particularly in the Northeast, is one of the biggest things that an individual consumer can do to fight climate change,” Boyd said.

Because it’s only moving heat around, not creating it, heat pumps are up to four times more efficient than a standard furnace. In the summer, they can reverse themselves, doubling as air conditioners. They rely on heat exchangers, clever pieces of technology that are behind refrigerators and freezers. On a modern heat pump, they can pluck heat out of even the coldest outdoor air.

“Even if it seems cold to your eye, if it’s any warmer than the vacuum of space, then there is heat out there to be moved,” Boyd said.

Right now, about 10 percent of homes in the U.S. use heat pumps. That number will have to go up if the country is going to meet its climate goals.

But there are downsides. They get less efficient the colder it gets. That’s why they’re more common in southern, warmer states.

And they may cost more to run than gas furnaces because electricity is usually pricier than natural gas, which heats about two-thirds of homes in Pennsylvania.

Nadzam found this out when he installed a heat pump in his house about 20 years ago, taking advantage of a special rate from a local electrical utility.

A few years ago, the utility ended its special rate.

“All of a sudden, my electric bill skyrocketed. Because when we go below 30 or 25 (degrees), that electric resistance heats coming on, and now the meter’s flyin.’ It’s smoking,” Nadzam said.

He replaced his old heat pump with a new one that works better in colder temperatures. As a result, his electric bill has gone down. Newer heat pumps are much more efficient than old ones, he said.

“It’s like a 1982 Cutlass Supreme versus a Prius. There’s no comparison,” he said.

But many contractors, especially in cold cities like Pittsburgh, are reluctant to recommend heat pumps to customers.

On a recent morning in Pittsburgh’s Beltzhoover neighborhood, Gino Ottoviani took a break from installing a new gas furnace. The customer called a few days ago; her 42-year-old furnace had gone out over the weekend. 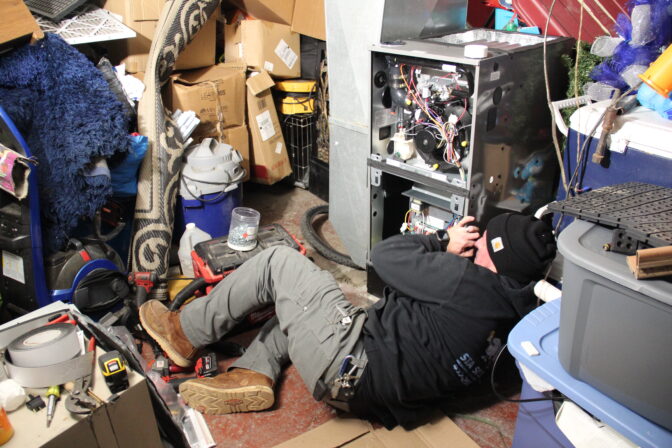 Contractor Gino Ottoviani installs a natural gas furnace in a Pittsburgh basement. He didn’t recommend a heat pump because of the added expense. Photo: Reid R. Frazier / The Allegheny Front

Ottoviani had worked in HVAC for 18 years, and started his own company, Sta So Cool HVAC, three years ago.

He recommended the simplest and cheapest replacement, a 70,000 BTU natural gas furnace, the “bread and butter’” of his trade, for around $6,000. He did not steer the customer to a heat pump, in part because the house didn’t have central air conditioning.

“Then we could have that conversation of, ‘Hey, if you’re going to replace this instead of just A.C. only, would you like a heat pump?’” he said. “But…we just needed to get her up and running.”

Such is the way for many HVAC contractors, who only get called on when a customer’s heat is out, usually on the coldest days of the year. Ottoviani said that over the extreme cold snap around Christmas, he received 105 calls from people whose heat had gone out.

One solution would be adding an electric heat pump on top of the gas furnace. That way, the gas furnace could run on the coldest days. But that would have cost Ottoviani’s customer six to eight thousand dollars extra.

The Biden administration is trying to make heat pumps more affordable through tax breaks. The Inflation Reduction Act, passed last year, includes extra incentives for low-income households to get heat pumps and other energy efficiency upgrades. Those incentives are likely to start kicking in later this year.

Parth Vaishnav, assistant professor of environment and sustainability at the University of Michigan, said the priority should be getting heat pumps into homes where they make the most economic sense.

“For existing homes, we should target homes that currently use anything other than natural gas,” Vainav said.

Vainav co-authored a paper that found that about 32 percent of American homes would see an immediate economic gain by switching to a heat pump, while 70 percent would see a climate benefit.

For those using natural gas, the predominant heat source in Pittsburgh, the solution is trickier. Many contractors recommend keeping a natural gas backup for very cold days, while running a heat pump when the temperature is above freezing.

That’s what Brendon Slotterback wanted for his Pittsburgh home, but when he tried to find a contractor who would do it, he encountered resistance.

“The first installer I talked to was like, ‘It’s not really going to work, and it’s going to be more expensive,’” said Slotterback, who works in the sustainability field and wanted to cut his own personal carbon footprint.

“And I knew that that was not true, just given, you know, folks that I talked to who work on this every day,” he said.

Slotterback and his wife Carissa, an academic with environmental expertise, eventually found a contractor to install a heat pump.

Their gas furnace remains in place when the weather gets cold, as it did in December. In their yard, the heat pump sits innocuously next to the house where the air conditioner once stood.

“It basically, you know, the unit they took out of there looked almost exactly the same. This one’s maybe like six inches taller,” he said.

Slotterback says heating costs are about the same as before – but they’re using much less natural gas. They buy electricity from a clean energy supplier, so they’re heating their home on an extreme carbon diet. 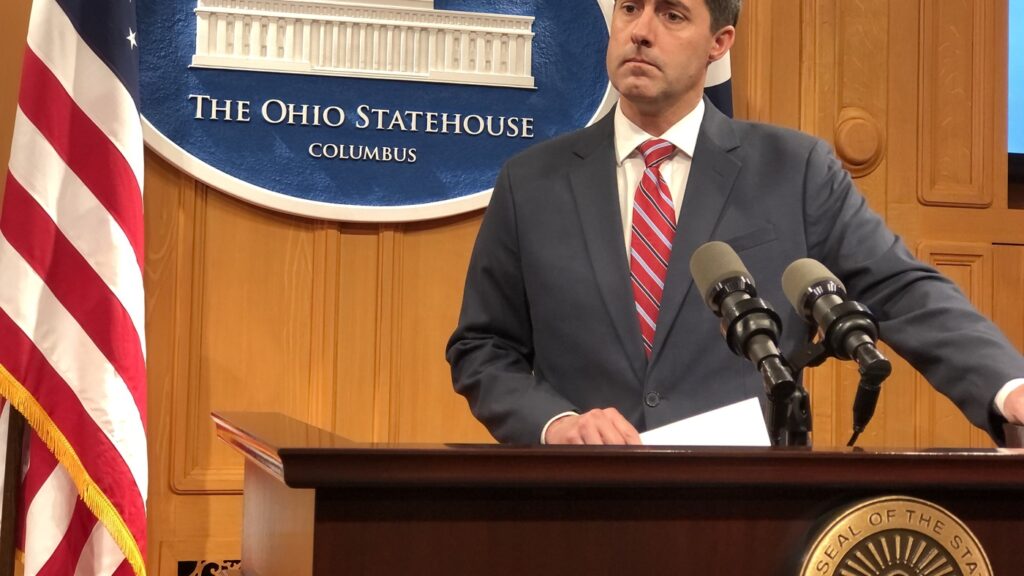 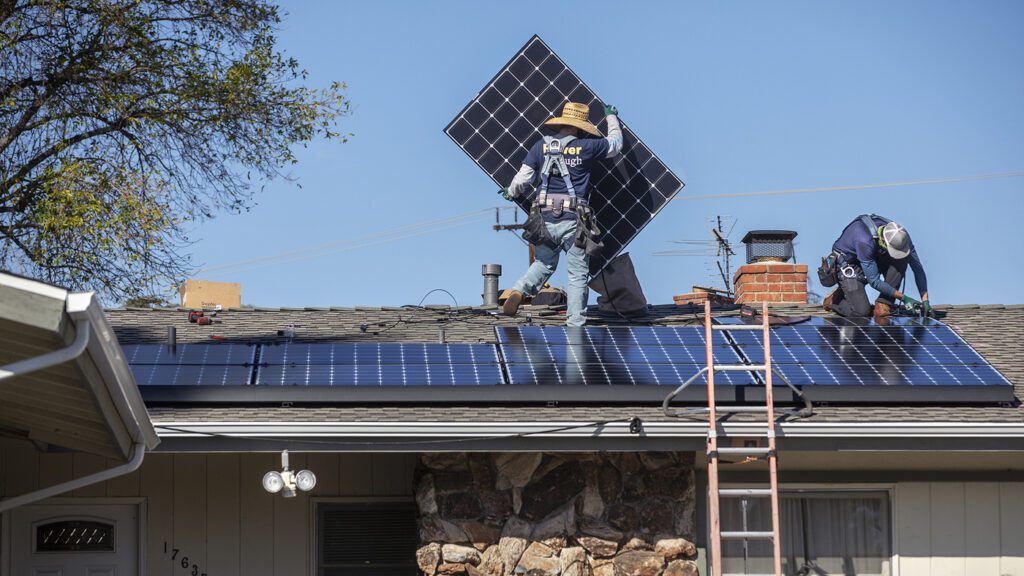