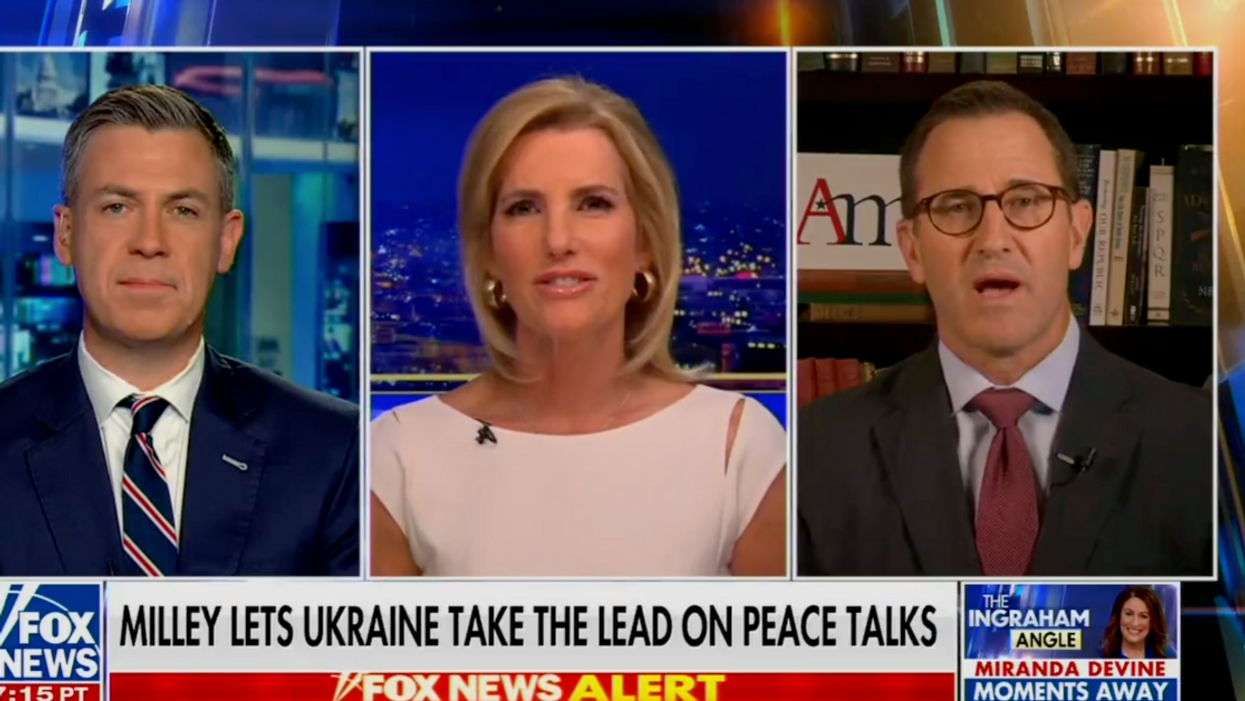 Ned Ryun—the CEO of American Majority, a conservative organization that trains right-wing candidates and activists—got some major side-eye online after he compared Russia’s ongoing invasion of Ukraine to “Bloods vs. Crips,” a reference to the gang warefare between two notorious Los Angeles African-American street gangs that gained power and influence dealing rock cocaine in Los Angeles rock houses during the 1960s and 1970s.

The Bloods and Crips are longtime rivals and while there are many reasons why the two gangs fight, the most common reasons include territory, drugs, and respect.

But control of the streets isn’t the same thing as a war that has kicked off the worst humanitarian crisis to strike Europe in decades, sending refugees scrambling and costing tens of thousands of lives.

You can hear what he said in the video below.

Ryun’s remarks came after Russian missiles struck Przewodow, a Polish border town near Ukraine, and killed two people. Because Poland is a member of the North Atlantic Treaty Organization (NATO), the Russian attack on Polish territory could trigger a wider conflict because NATO members are obligated to go to war to defend the entire alliance under Article Five of its treaty.

However, leaders of Poland and NATO have said that the missile was most likely fired by Ukrainian forces that were trying to defend their territory from Russian forces.

And though they believe the situation appeared to be a mistake, that’s not at all how Ryun took it, telling Fox News personality Laura Ingraham on her program that the incident is a sign that the United States should have a say in funding and peace talks.

“We should absolutely have a say. [Ukrainian President Volodymyr] Zelenskyy is a corrupt oligarch who is a psychopath who clearly wants to drag us into nuclear war. [Russian President Vladimir] Putin is a thug, fair enough.”

“But people are trying to frame this argument as a fight over democracy and freedom and as an age-old fight. I’d consider it more Bloods vs. Crips.”

“And we’re actually funding it. This is a proxy war that the US is primarily funding… If we have any say in leadership in the Western hemisphere to say, ‘We’re not going to be funding this anymore. You’re going to come to the peace negotiation table and we’re going to do it immediately.'”

\u201cDoes this white dude even understand what he just said? \n\n”Bloods vs. Crips”\n\nUkraine is fighting for its sovereignty, democracy, and the lives of its citizens. \n\nHow does the drug war between two gangster groups measured as the same?\u201d

\u201cYeah, Russia’s invasion of Ukraine is similar to a gang war.\n\nThis fool doesn’t know a lick about either. Thanks, Fox.\u201d

\u201cMakes sense if you view anyone not American as evil…\u201d

\u201cProposed follow-up:\n-“So, in your analogy, which is which? Is Kharkov Compton, or Crenshaw? Is Putin Suge Knight? Who’s Tupac, who’s Biggie?\n\n…I mean, if you’re going to make that analogy on television, with millions of people watching, I assume you’ve thought it all out.\u201d

In the weeks before the invasion, Russia had issued several security demands the United States and its allies rejected.

Putin aims to curtail the enlargement of NATO, seeking to bar Ukraine from joining the alliance in a bid to assert Russia’s influence over its neighbors, aspirations that gained further prominence after Putin seized the Crimean Penninsula.

Although Ukraine is not yet a member of NATO, it is partnered with the military alliance. This development angered Putin, who views Ukraine not as an independent nation but as land lost as a result of the end of the Cold War, which resulted in the Soviet Union’s collapse and diminished Russia’s superpower status.

Putin had left world leaders guessing as to whether or not he actually wanted to proceed with an invasion though he clearly wants NATO to curb military exercises in Ukraine and in other former Soviet satellite states, demands that resulted in a diplomatic stalemate.

Despite these facts, Fox News has spread misinformation about the war before, and Laura Ingraham herself sparked outrage earlier this year after she called Ukrainian President Volodymyr Zelenskyy’s plea for peace ahead of the invasion “pathetic,” prompting many to criticize the right-wing’s normalization of Russian President Vladimir Putin’s actions.